Suggested approaches to common issues in your Home System have been tested and confirmed to work as advertised, and while recommended, many areas are a matter of each Captain’s personal judgment and preference.

Second to Hydrogen and effectively a product of it, the amount of credits you generate each turn only scratches the surface of the many moving parts and underlying opportunities to optimize your top-line credit income.

Briefly, the major methods are:

The following discusses the best use of Shipment Computer, Trade Boost & Burst and Shipment Relay.

Remember, every hour the shipments to a given planet refresh. If full, shipments will be sent one-way to the Nether, in order to put new ones there. Don’t leave premium (post-bonus) shipments waiting too long, or will begin to lose the bonuses you’ve applied. In terms of Hydrogen usage and concern about “waste”, remember that “waste” is a relative term —it all depends on what the potential credits are worth to you at the time. Hydrogen production is the fundamental economic driver and will almost always be in short supply, budget accordingly!

Trade Stations provide the best bang (Credits) for your buck. Expensive to upgrade in terms of credits, but with an ROI far superior to even the top tier Gas/Terran, even Ice Planets.

Accordingly, you should create all three Trade Stations as soon as they become available and you can spare the 60K credits (each). Try to prioritize the first upgrade of these stations and your overall Economy will noticeably improve, which is a nice change of pace from the long grind of planetary upgrades.

▸  Important Note: Trade Station is far superior in ROI terms than even the Ice planets, although the chart shows the latter as having the quickest pay-back, that is because the chart does not factor in the Colonization cost (Variable based on order in which each is colonized).

Since an Ice Planet will always have a colonization cost of $1–2 Million Credits, realizing the very first level of 200 shown on chart above, would require around 10,000 hours more, fewer technically as you upgrade the planet of course, since as with any fixed cost relative to revenue. 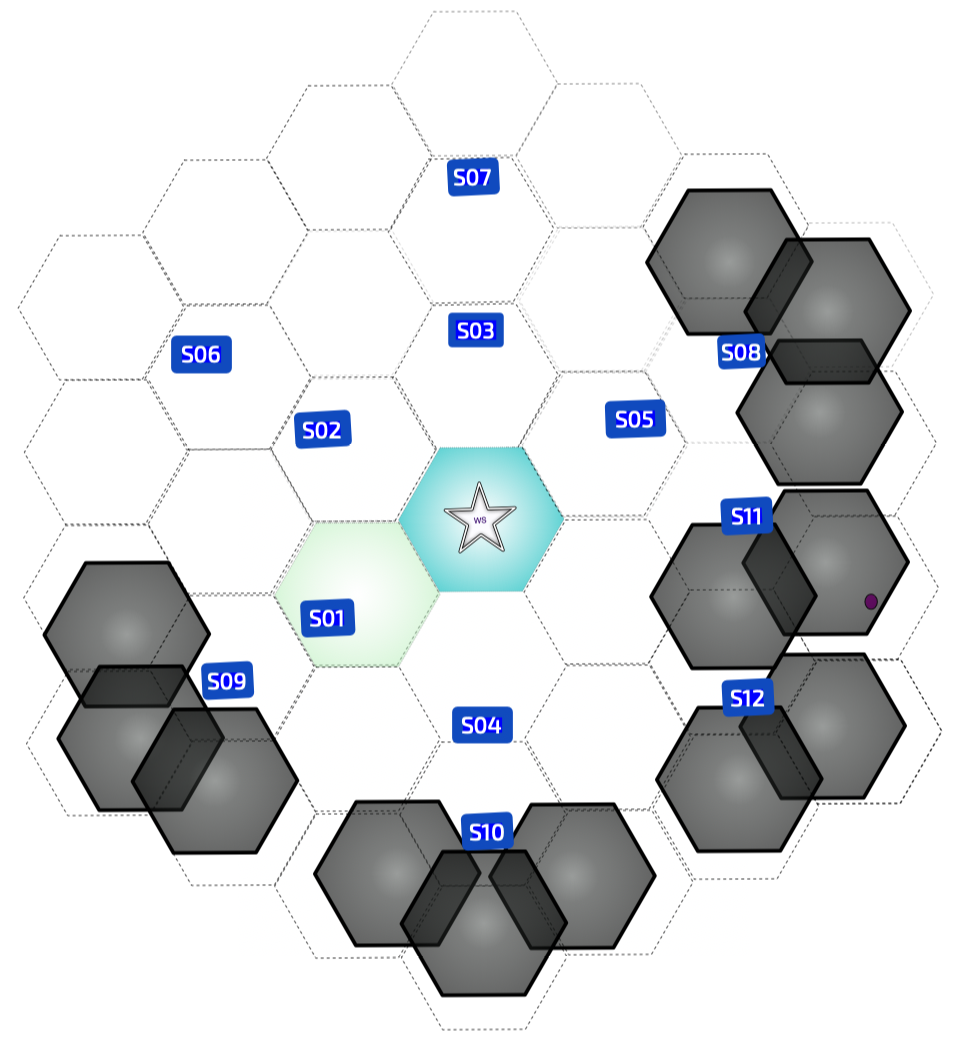 Most modules and overall ship class upgrades have an effect on the amount of Hydrogen a corresponding ship will require. Pay attention to this and consider the implications of your Hydrogen Economy carefully, prior to committing to an upgrade (recommended) and especially prior to equipping or becoming dependent on its use.

You should pay close attention to how much it costs to run your Battleship and Transports over a given distance, such as a sector. You can see the amount of Hydrogen your ship would use by clicking on it once then sliding your finger to a destination or alternatively, the amount of Hydrogen/AU is a statistic listed on your ship detail page and provided you know the distance, just do the math. I suggest settling on a kind of standard and using that information to plan medium-long term. i.e., Cost/100AUs.

➞ Update this as you grow because it increases with new tech levels.

Hydrogen is the most basic economic unit in the game, and every bit of progress you will make stems from it. Gathering Hydrogen and maintaining enough of it is a balance between:

There are some tactics you can use to increase your total Hydrogen income, including harvesting it when you visit Red Stars, and via partners thru a Diplomatic Gateway. The latter can be difficult with another live human player, but you may want to consider setting up an “Alt” (Alternate) account by creating another, separate instance of Hades Star and connect that via your Diplomatic Gateway.

Learn How to Make a Hydrogen Farm
Enriching Sector Asteroids: 100 to 1500 in 18 days

A sector can be leveraged as a Hydrogen Farm. Such sectors are dedicated to Hydrogen production, and provide an additional sourceH-juice. To create a farm in a given sector:

Once you have a Farm Sector containing 14 rocks worth 1500 Hydrogen each, here is one example on how to best farm it each day.

Scenario 1: Assuming you have Enrich Level 6 (18%), you can use a Miner with 2,000 capacity and Hydrogen Upload Level 6 (55%) to mine 3100 Hydrogen from that Sector each day. Your Miner will fill to capacity, use Hydrogen Upload once, then fill back up to capacity (3100 total). Then, applying just a single Enrich will restore all 14 rocks back to 1500 each.

The total take away is 8400 Hydrogen, and of course with four (4) MNs and 2 Sectors = 16,800 Hydrogen, all captured within about 10 minutes real-time including Hydrogen Upload refresh and with Mining Boost active. This can be even faster if you use your Alt ships to provide TW and/or the system TimeModulator.

If you then return these MNs to your home system and return directly, Mining Boost will still have enough time to hit another 2 sectors (2 MNs each) and pull another 16,800.

This method offers a good balance between efficiency & quantity harvested, if you Enrich at 19% =three times=, returning the rocks to 1500 each.

To be clear, each of these 4 Sectors will then require at least 48h before returning to 1500/rock, or 72h if you want to wait for that given Sector to be immediately “Enrichable” after Mining it again in the future..

This means 33,600 Hydrogen in < 25 minutes, and 4 sectors put “out of commission” for 72 hours total. If you have at least 16 total Farm Sectors and are careful to Enrich as soon as possible each 24h, then you can pull a steady 33,600 Hydrogen every single day continuously. Having 20+ Sectors gives you some wiggle room so you don’t need to be so timely with Enrich.

✵ Note however: If your 2K Cap. MNs can upload only 50% (1K), then you can follow the same methodology and get a little less (8,000/Sector) and Enrich at just 18% (the optimal Enrich technology level IMHO) and still get it done in 72h (3x Enrich). This translates to 32,000/day as compared to the 33,600 above. So, the formal recommendation from SPKZ Research is MN @ 2K Capacity, 18% Enrich and 50% Hydrogen Upload, with at least 16 Farming Sectors in and Alt System.

**It is best if you create your Hydrogen Farm in either an Alt account, or in a Diplomatic Partner system, because you can then use Sector Assignments and rest easy knowing your Miners will never mistakenly mine our your entire Farm one day!

Generally, if you aren’t planning to make every Alt Sector a Farm, then you will want to create your Hydrogen Farm Sectors in a Sector that naturally generates the least amount of Hydrogen each day. This of course means you would not want to use the Sectors that are either adjacent to your starting planets, and especially NOT the final several sectors that can be revealed, as these will generate upwards of 4K in Hydrogen each day on their own, fully mined out. That’s half what you can get from a farm each day, but with the benefit of not having to worry about Enriching it.

Caution: Again, it is generally best to always use Mining Routes, so to avoid accidentally destroying your hard-built farm! i.e., any Miner given a Planet destination and allowed to remain indefinitely, will almost always soon take-off and begin mining randomly on their own! Therefore, if you are Mining in your Home System, you must manually park your Miners at a Warp Gate or at a Station of some kind. Meanwhile, if you set them out on their Route, they will go safely into idle after mining the 5 assigned sectors.
Hydrogen Mining Farms: Benefits of Using an Alt Account System.

To repeat, you never have to worry about your Miner suddenly destroying your farm. A “foreign Miner” stops once filled, and does not move. It will never travel to another sector in that system unless you manually direct it. Plus, once at capacity (assuming 2,000), you can simply hit Hydrogen Upload anytime you want, (like the above example #1) completing the extraction for that Sector, then either use Enrich on your own Miner, and/or use a Miner from your Alt Account to Enrich the Sector back to 1500/asteroid.

The following video attempts to describe the use of Shipment Drones, comparing the benefits with alternative modules such as Trade Burst and Trade Boost. Off the top this one thing can be said which is perhaps most important of all:

All else being equal, meaning even if the bonus level of these modules happened to be exactly equal based on your current tech level, Shipment Drones offer multiple significant, unique benefit over Trade Burst/Boost:

With that as a summary, here is a closer look at how to employ Shipment Drones:

See REST, WEST or BEST for Red Star, White Star and Blue Star military information. Learn about strategies, tactics plus weapons and defense information, including many easy to reference charts and graphs, respectively.